Bringing democracy to Shchastia, traumatized war-town with a happy name. 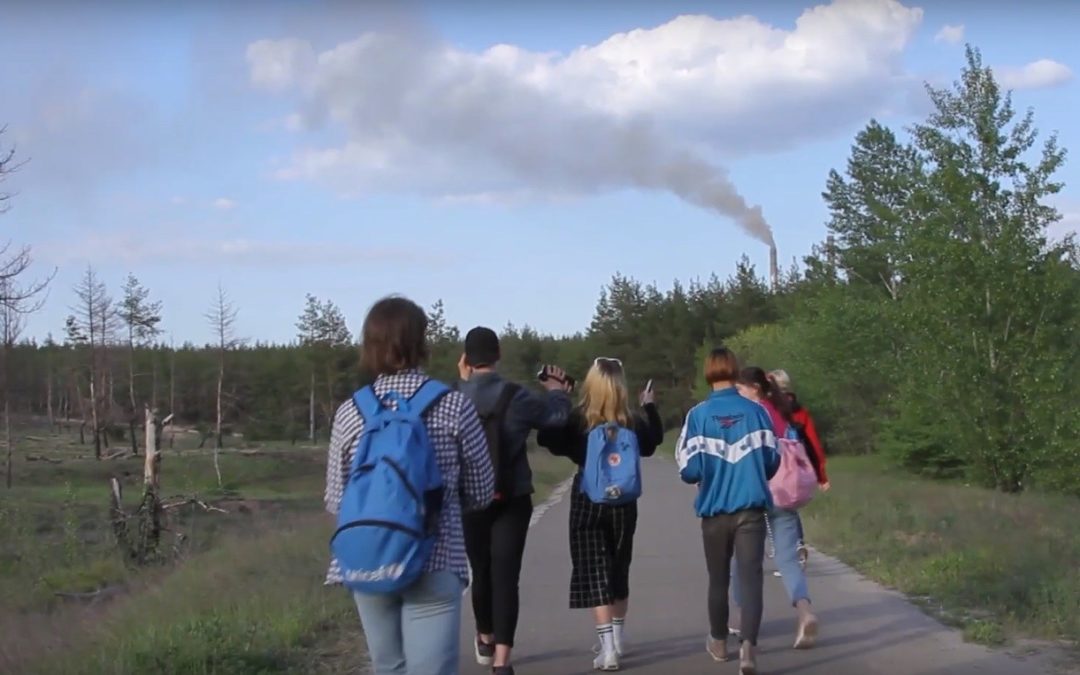 Bringing democracy to Shchastia, traumatized war-town with a happy name

“Shchastia means happiness in Ukrainian. Shchastia is also the name of a frontline town in Luhansk Oblast. Prolonged warfare in the town has discouraged a hopeful outlook among residents, especially young people. In early May, the school of Documentary and Media docUA sent a contingent of media professionals to Shchastia to carry out an innovative project for the youth of the town. …”

The instructors of Media docUA recognized immediately that local youth are heavily downtrodden by the destruction all around them. They knew they needed to show them that they still have options, in spite of their dismal circumstances.

Shchastia is located about 15 kilometers from occupied Luhansk. Prior to the war in Donbas, Luhansk had been a regional center with much to offer–work opportunities, education, entertainment, and everything else one would expect of a bustling city. Shchastia is a mere 20 minutes away, but once the war began the town was cut off and confined. The only way to reach any other locality from Shchastia is by road. As in most parts of Ukraine, roads are in poor condition and always a challenge to navigate. But with the war came the added problem of military checkpoints.

The road to Severodonetsk, which became the oblast center after 2014, is but one example.

The trip takes at least an hour and a half. Rundown minibuses are the single available transportation, and they only run twice a day. Minibuses are so crowded that some passengers have to stand the entire way. With no other means to get out of the town, people are literally locked in and isolated.

When outsiders visit Shchastia, they are usually shocked to find the conditions of the town to be as awful as they are. But for locals they’re merely a part of everyday life. Demolished houses, broken roads, sombre faces, and a sense of desolation is today’s Shchastia. How can a young person but feel dismayed in such circumstances — at every turn the prospects for a better life are grim. Zhenya Chudovska, 15, writes in an article for the newly created website made for the project:

“Often the teenagers and other citizens of Shchastya say there is nothing to do here. That is why they find other entertainments — alcohol, illegal substances, vandalizing — and justify themselves by the fact that there is nothing else to do in Shchastia.”

Often teenagers feel there is little sense in doing something in Shchastia, since the town can be destroyed by war at any moment. Although the worst shelling took place from 2014-2016, it continues in the vicinity and some projectiles can explode as far as the town.

The recent Media docUA project in Shchastia was conducted with the support of the US Embassy. It was spread over two weeks and took place during the first half of May. At the core of the project was the goal of introducing basic principles of democracy to local teenage students and, in doing so, lay the foundation for a brighter, more hopeful future.

The teenagers who took part in the docUA project have proved to be very special. On the one hand, they are no different from their peers across Ukraine and elsewhere in the world — they hang out with friends, find their first love, complain about homework and so on. But on the other hand, they are very different from their peers. The five-year war has been so grounded into their lives that they barely notice it anymore.

Local youth are clearly demoralized by the destruction of war all around them. The challenge for docUA was to show them that they still had options. It was obvious they needed to believe that, in spite of their dismal circumstances.

The Shchastia docUA project was multi-layered. Teenagers experimented with documentary filmmaking, learned new web applications, and were introduced to exciting developments in IT. Surprising to some, they learned how to use their townsite as a location for filming and as a subject for filming. They created four documentaries and the website — all of them independently.

Local citizens believe the only reason their town has escaped total desolation is because it is the location of the Luhansk thermal power plant. The plant is critical for energy, and it’s the only major employer in the area. Since 2017, however, the plant has been cut off from the occupied territories, and one of the greatest fears of residents is that it’ll be cut off totally, and then the town will no longer have a reason to exist. But to some young people, the town already feels like a dead end.

“I have been struck by the course of life of these teenagers — they graduate school and leave the town. Not a single one told me that they would stay in Shchastia. For example, even in Stanitsa Luhanska [a town located 3-4 kilometers from the so-called “LNR”] kids were telling me they are going to live there. That they will study somewhere and then return,” says Larisa Artiugina, the Head of the New Donbas NGO and the organizer of Media docUA, documentary director.

But she understands the thinking and lack of motivation of local teens, and can’t blame them.

“The question is that so far the local government does not have an action plan for changing the situation. I know that it’s not easy to do in small towns near the frontline. But it’s possible to turn the House of Culture [Soviet era] into a creative cultural space…to turn the main square into a place where different activities can take place. Kids told me that so far everything that happens in Shchastia is only happening when someone comes to it from outside.”

The Shchastia project is not the first of its kind that Artiugina has implemented for teenagers in eastern Ukraine. She has seen firsthand the many positive results of earlier projects.

Artiugina is confident the underpinnings of the problem is not just war. Only the widespread development and acceptance of democracy can change the moral outlook in frontline towns — especially by youth.

Today, there is no interaction between government and ordinary people — the role which should be implemented by democracy watchdogs which is media. Artiugina believes that a strong independent media is needed to change attitudes and improve the situation. In the war zone, people are desperate because of the poverty imposed by war. Their homes are destroyed and there is little work. Artiugina feels the only means of reclaiming hope is through youth. It’s a challenge for sure. But some challenges should not be as complicated as they are.

Artiugina organized the docUA project to help local teens by learning skills in different creative mediums. For example, she arranged for Belarus documentary filmmaker Marta-Daryia Klinava to teach the fundamentals of film and then apply them to documentaries.

Artiugina pulled together a team of media experts, academic authorities, and technology specialists. The team included Anna Krotkina-Brodsky, an American professor of journalism; Iryna Koshman, a lecturer in journalism at Severodonetsk University; and Olena Makarenko of Euromaidan Press who prepared sessions on journalism and helped students to prepare materials.

A number of individuals provided technological expertise. Iryna Scherbina, a professor in the State University of Telecommunications, provided instruction on how to create a website. She also introduced them to the variety of IT professions that exist in today’s market. Many students were inspired by these opportunities and felt encouraged to pursue them. Serhiy Korovayny, New Cave Media producer, presented the exciting realm of virtual reality to Shchastia. Aftermath VR: Euromaidan is a virtual reality museum depicting the bloodiest day of the Euromaidan Revolution. Korovayny also demonstrated 360° video, which allowed students and other locals to experience virtual travels.

During the project, it was evident just how much the war has become their norm. One documentary focused on 11-year-old girls who live in temporary residential facilities. They collect plastic bottle caps that are used to make prostheses for maimed soldiers who have lost one or more limbs.

Another documentary created by the teens, follows a brief tour around the city. One of the clips is of a shell protruding from the asphalt of a city street.

Several articles have been published on the new Shchastia website. They range from the town’s origins to modern-day life, where a multitude of rules governs every action. Shchastia is located in the so-called yellow zone close to the front and activities are restricted.

The website includes an interview with a local police woman — the juvenile prevention inspector. The teenagers think very highly of her and wanted her to be the subject of one of their materials.

Playing on the town name of “Shchastia” is found throughout the site, underscoring the irony of the word (“Happiness” in English). One article focuses on students asking local citizens whether they feel “happy.” Some of them said yes, some said no, but the war was also present in the answers.

“There was happiness when I was young…when I came to work at the power plant. For me it was happiness. There have been different periods of my life. They were interesting, but I can’t call it happiness. I think that there is only one kind of happiness–when you raise small children,” a local resident told writers Polina Bezhanova and Yevheniy Kublitskyi.

Sadly, he apologizes for his pessimistic outlook, saying he lost his wife as a result of the war.

The day after the docUA trainers left Shchastia, the teens had to inform them of bad news: “You were lucky to leave yesterday. Today we heard strong explosions.”

Life near the frontline goes on. Still, the project achieved several goals and many young people were uplifted by what they learned. Zhenia, who had been writing an article about the desperate conditions in Shchastya, was able to add the positive example of another frontline town — Mykolayivka, in Donetsk Oblast. The docUA trainers had told Zhenia that young people there who took part in similar projects started their own local initiatives. Zhenia is optimistic that Shchastya can do the same.

Oleksandr Moshkov, another of the students, especially valued that the project gave the teenagers an opportunity to become united as a one team. But also learning of new IT specialities showed him the many different kinds of IT jobs he can consider for his future. Oleksandr’s new technological capabilities allowed him to organize all the content of the project’s website. Liza Leonova also thinks she will use her new-gained skills for the future:

“I’m happy that the project chose our town.”

The film director and the trainer of the program Daryia Klinava is convinced that the same kind of projects have to take place across the entire frontline. Similar support networks needed to be created. According to Klinava, the conditions of instability and fear in which people on the frontline live, make it imperative that young people gain some semblance of assurance for the future. They need to know that they can achieve accomplishments and will be able to change things for the better.Klinava’s final thoughts are touching. She believes the most important benefit of the docUA project was to provide moral therapy for teens traumatized by war. During the project, they started to trust their trainer and speak openly about their experiences of the war…the war that five years later shows few signs of ending.